Print And Be Damned 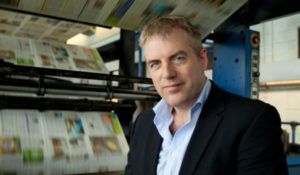 SIDELINE Factual are now in post-production on their 4 x one hour BAI / TV3 series Print & Be Damned. Over 80% of Irish people read a newspaper regularly and in this new landmark series we document for the first time on Irish television, the creation, development and establishment of the Irish newspaper industry.

With TV3 broadcasting the series in a primetime slot, it offers a wide audience an opportunity to educate and inform themselves about the most important social and cultural media outlet generated through the 20th century. While the subject matter may seem academic and historical the content will be dramatic, compelling and significant. The story of Irish newspapers incorporates politics, business, and the full gamut of themes such as distribution, advertising, censorship, libel, celebrity, journalism styles and ownership battles. The series ends exploring how we receive and read our news. With new broadcast platforms, hand-held devices and dedicated online news sites, the news media has to adopt or suffer commercial consequences in the 21st century.